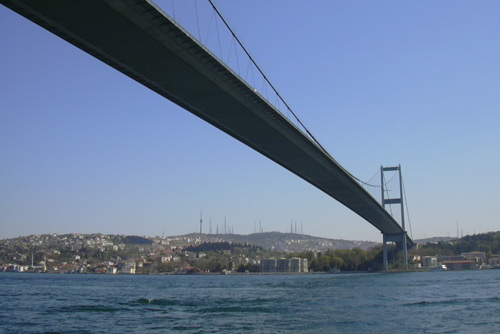 When looking out over the blue Bosphorus Strait which links the Black Sea and Marmara Sea, one cannot help but admire its natural beauty. Some 30 kilometres long, the Bosphorus is a natural waterway which twists and turns between two continents. Despite urban development, the waterway is still lined with scenic greenery on the surrounding hills. Palaces, parks, villas and hotels lined along its shores, all add to the splendour, beauty and historic nature of the Bosphorus.

Despite the fact that it is surrounded by seas on three sides, Turkey is not renowned as a seafaring nation. This seems to be reflected by the relative calm of the Bosphorus. Sailing is restricted on the Bosphorus to sporadically organised races, and despite the many passenger and motor boats criss-crossing the waterway, as interrupted by the passing of a lone tanker or cargo ship down the middle of the strait, there seems plenty of room for everyone. 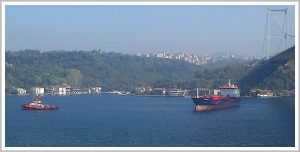 However, appearances can be very deceptive. When one considers the number, and the enormous length and size of the tankers and cargo ships which pass through the Bosphorus, and the changing weather and sea conditions, one can understand that the Bosphorus is in fact a relatively narrow shipping lane. The Turkish name for the İstanbul Strait is “Boğaz” which means throat. It is an “S-shaped” channel with several sharp turns, headlands which obstruct a clear view ahead, and strong currents, and as such confronts ships’ captains with a very challenging if not potentially dangerous obstacle.

When the Montreux Convention was signed in 1936, some 4,400 ships passed annually through the strait that year. This figure has increased more than twelve times to close to 55,000 in recent years. This has made the Bosphorus the second most busiest strait in the world after the Malacca Straits. It is not surprising therefore that accidents have also increased dramatically. In the last 60 years, close to 500 incidents have occured on the Bosphorus. The majority of these were collisions.

The biggest accident which I can remember is the Independenta tanker accident on November 15th, 1979. This Romanian registered petrol tanker collided with the Greek registered cargo ship Evriali at the entrance to the Bosphorus Strait just off the port of Haydarpaşa, on the Asian side, causing a big explosion which shattered windows in many houses on shore. 43 seamen died in the accident and the ensuing fire lasted 27 days. Of the 94,600 tons of crude oil carried by the tanker, some 64,000 tons leaked into the sea, with an estimated 30,000 tons burnt in the fire.

At the time of this accident, I was living in Balmumcu, up the hill behind Beşiktaş, on the opposite European side of the Bosphorus. When I left home for work that morning I noticed that the light outside was very dark, as if it was going to rain. It was only when I looked down the hill towards the Bosphorus that I saw the enormous cloud of black smoke billowing up, covering the sky and blocking out the sun. I could also see sparks from explosions on the stricken ship. Such a catastrophe right in the centre of Istanbul was a shock for everyone and showed the danger to which the Istanbul population is exposed to by shipping on the Bosphorus Strait.

The currents in the Bosphorus are treacherous because the strait links two seas with different sea levels and amounts of salt concentration. The less salty water from the Black Sea flows in the opposite direction above the water to the more salty water currents coming from the Marmara Sea. The current from the Black Sea flows faster and this can be seen in the water at Akıntı Burnu near Kandilli half way along the Bosphorus on the Asian side. The current here reaches a speed of 1.45 metres per second around the protruding  headland. 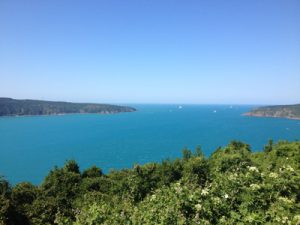 The stretch of the Bosphorus in its middle between Yeniköy on the European side and Kandilli on the Asian side is the most difficult to navigate, and is the site of many collisions as ships lose control over their steering. One accident happened here when I was living in Rumeli Hisarı on the European side of the Bosphorus. This is the narrowist point of the Bosphorus, some 700 metres. A collision occured just north of Anadolu Hisarı, on the Asian side, on November 14th, 1991, between the Philippine registered cargo ship Madonna Lily and the Lebanon registered cargo ship Rabunion XVIII which was carrying more than 20.000 sheep. Rabunion XVIII sank and most of the sheep never escaped the vessel. Five seamen died. The accident happened at night and we only became aware of the accident when oil drenched sheep started to swim ashore at Rumeli Hisarı. We all rushed down to the sea to help rescue the sheep. The coast road was soon full of distraught sheep black from oil.

Though the Montreux Convention gave control of the Bosphorus and Çanakkale Straits to Turkey, it did regulate that they would remain as international waterways in order to ensure freedom of passage and navigation of shipping. The Turkish Government has introduced new navigational systems and rules which have improved the safety record of the Bosphorus over the last 20 years. However, the use of pilots for transit shipping is voluntary and only some 40% of such vessels make use of this service. The Turkish Government would dearly like to increase its control over the Bosphorus Strait for strategic, economic and safety reasons. The Turkish Government has therefore recently revived the project for an alternative shipping canal to be dug between the Marmara and Black Seas, outside Istanbul on the European side. This is a monumental project, but maybe not such a fantasy as land prices along the proposed route are already starting to increase.

The Bosphorus Strait is now a graveyard for many ships. Most if not all of these ships remain at the bottom of the strait. There are no means available to lift up these wrecks. Even if there were, the strong currents would make such an operation very difficult. In some cases, such as the Madonna Lily which went down with thousands of sheep, there were worries about the effect on the marine environment. The danger of pollution from the rotting sheep corpses was a matter of debate. However, as is the case with all such accidents, the saving factor is that the strong currents will eventually clear spills of waste from damaged or sunken vessels. The immediate damage to marine life is however irreversible. Unfortunately, it seems that very little recompense has been received from ship owners as a result of the damage they have caused to the marine environment in the Bosphorus. The reason for this is that such damage is very difficult to assess. More attention by the authorities needs to be directed to this area.

Much needs to be done to improve safety of shipping in the Bosphorus Strait which is in the middle of a city of some 17 million people. Pollution from cities, towns and industrial complexes around the Black Sea and Marmara Sea, and from urban areas located on the Bosphorus, is already bad enough without the added dangers from oil and other toxic waste released as a result of shipping accidents. The Bosphorus will only be able to continue to give us pleasure if we maintain its natural beauty and protect its marine life from  pollution.