The Power of the “Simit” 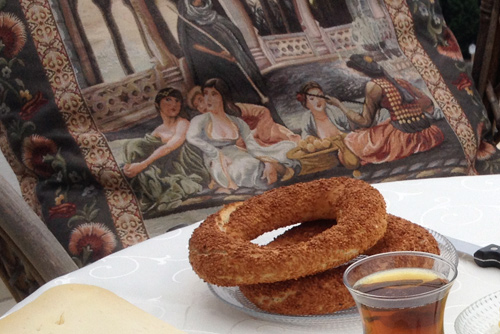 Moving around Istanbul, one often finds oneself in a need for a bite to eat. Whether going on foot, by public  transport or by car, one will invariably find the” simit” within easy reach. This ubiquitous baked street snack, a ring of baked bread covered with sesame seeds, is generally sold by street vendors in glass covered carts or on trays carried on their heads. If you are sitting in your car in a traffic jam, you will most often than not be able  to buy a simit from a vendor as he weaves his way between the cars with the simits wrapped around a long  stick.

The origin of the simit is generally attributed to Turkey since it has clearly been a delicacy since the mid 14th  century when the Ottoman Turks moved into the Marmara Region of Turkey. The word simit comes from Smiti which was the Greek name for İzmit, a town on the shores of the Marmara Sea south of Istanbul. The simit was  made in Smiti and then sold to the passing caravans which no doubt gave the simit its name from the town  they bought it from. Evliya Çelebi, a well known Ottoman traveller and writer during the 17th century, noted  that there there were 70 simit bakeries, employing some 300 bakers in Istanbul. 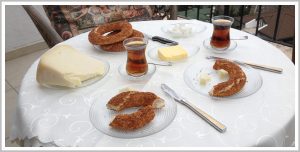 The simit is common in the Balkans and very popular in Greece, where it is called “koulouri”. It is also found  in the Middle East such as in Lebanon. In Izmir, it is called “gevrek” meaning ‘crisp’ in Turkish. This name is the same in Bulgarian, and similar to “devrek” in Serbian and “gjevrek” in Macedonian. The size of the simit,  its taste and other characteristics change a little by region. The simits in Ankara for example are smaller and  crispier than those in other Turkish cities.

In recent years, cafe shops selling simit related products have become very popular. Chains of such cafes shops  such as Simit Sarayı and Simit Dünyası have opened up throughout Turkey. Simit Sarayi also has cafes in many European countries, and in Egypt and Saudi  Arabia. The simit has even invaded the USA where a simit cafe has recently been opened in New York called Simit + Smith. The simit is now seen as the ‘Turkish bagel’ there.

The simit can be eaten at every hour of the day. It is often eaten at breakfast. Passengers on the Bosphorus ferries on their way to work in the morning enjoy a simit with their glass of tea. Over the years in İstanbul I have personally enjoyed a simit at weekends in the late afternoon. A sort of Turkish five o’clock tea. The vendor would walk down our street calling out “simitçi”, meaning ‘simit man’ in Turkish. His simits would be warm and fresh, and we would eat them with “eski kaşar” cheese, butter and freshly brewed tea. Kaşar cheese is one of the most important dairy products of the Thracian region of Turkey. It is a mild, pale yellow cheese made from sheep’s milk. ‘Eski’ means ‘old’ and “eski kaşar” is a matured and harder version of kaşar cheese.

Though I do not eat as many simits as I did in the past, I still partake of a nostalgic simit from time to time. However, I will only eat them in their original form, without having them stuffed with other supplements or prepared using brown bread as seems to be the fashion these days.

Many have witnessed street vendors accidently spilling their precariously stacked load of simits on to the street, to only then see them gather them up and put them back on their board or stick for sale. Hygiene often comes to mind when buying a simit. The taste and the availability of the simit clearly outweigh other considerations.

The simit is moving from strength to strength, and is becoming an established fast food product in its own right. The word simit is also used to name life buoy rings on the side of ships in Turkey. The simit is clearly life saving in many ways, and saved many a man from drowning or from hunger. Long live the simit !